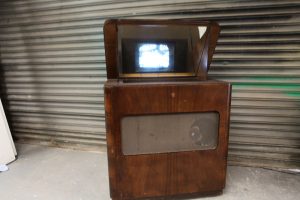 This is a EKCO model TSC48 mirror-lid television, produced in June 1948.

It is in a figured walnut veneered cabinet but has been cleverly converted to contain a more modern television set. The original cabinet houses the workings of an early 2000’s portable colour television set and has a carefully fitted DVD player built in, with access for DVD discs through a discrete slot in the rear panel. The TV tube is the same 12″ size and shape as the original so from the front and sides this unit looks completely original. It comes with remote controls for the TV and DVD player and a DVD of old black and white TV adverts which will just play in a loop when the set is plugged in. You can of course just pop in you own DVD (either black and white or colour). The fact that it still contains a CRT (tube) TV and not a new LED flat screen keep this item looking and sounding authentic. The TV has also been cleverly converted to show a mirror image picture so that when reflected in the mirror the picture is the right way round again – just like the original.

The lid hinges down to hide the mirror and screen when not in use and the cabinet has not been restored and so has all the scrapes and knocks which you would expect a piece like this to gather over 70 years. The cabinet is on wheels and the original control panel with it’s nostalgic bakelite knobs, dials and switches is intact and set in the left side of the cabinet (although is performs no function now). The screen is surrounded with a black mask under a protective glass panel, the interior is lined in brown baise material and the lid holds a 45 degree framed mirror. When raised the lid features side light buffers.

This set was the last ‘mirror-lid’ television to be made and one of only two models to appear in this format after WWII. When television tubes (CRT’s) were made at the start of electronic television in 1936, the largest CRT’s (12”) had very long necks, so to reduce the width of the cabinets the CRT’s were mounted vertically and the image was viewed on a front silvered mirror mounted at 45 degrees. Rapid advances in technology led to the manufacture of tubes with much shorter necks and eliminating the need to mount them vertically.

EKCO stands for Eric Kirkham Cole Limited (E.K. Cole Ltd). Eric Kirkham Cole and his girlfriend started making radio sets in 1924, they later married and in 1927 set up with funding from local businessmen, a new factory at Leigh-on-Sea, they expanded, first to premises owned by their various directors and then in 1930, to a very big new factory at Southend-on-Sea.

E.K. Cole undertook the manufacture of radio tubes for their own radios. In 1939 this commercial tube operation was taken over by Mullard. However the facility remained and was used to manufacture tubes for the armed services during the war.

Ekco produced also Air Interception radars for the RAF, Air to Surface Vessel sets for the Fleet Air Arm, amending these for installation in ships for the Royal Navy (and stopping the 100 valves jumping out of their sockets when guns were fired) and Search Light Control sets for the Army. Car radios, tape recorders and radiograms were added to the range of products.

1960 saw Ekco being taken over by PYE Ltd. From 1969 the factory no longer traded using the Ekco name but under the TV Manufacturing Ltd. banner. However this was short-lived and the company became PYE TMC Ltd.

Would be a brilliant talking piece in any pub, restaurant or shop (especially if you made some relevant adverts / videos), would also be ideal for displays, museums or theatre / television work.

This item can be be delivered anywhere in UK or Ireland on a pallet. Due to it’s size I cannot organise international shipping, but international buyers are welcome to arrange their own collection and I will leave the item secured on a pallet for collection.